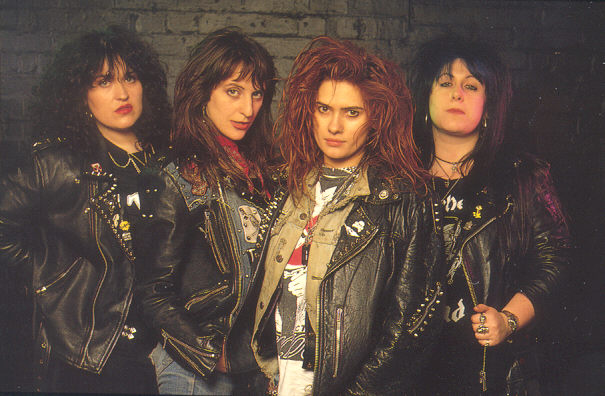 In our ôBack To The Pastö story, we go to the UK this time. The city of London is the place to be, and weĺve been to this place several times already. The whole NWOBHM movement has come to an end, and a lot of bands are trying to become the next big hype by creating something completely different than what has been done before. Itĺs the end of the eighties, and the world is ready for something new. During that time, some girls get together, and they will form a band. A band, that may not have been able to achieve the success that other all-female bands had, like THE RUNAWAYS, GIRLSCHOOL, ROCK GODDESS, VIXEN, ICE AGE (who easily reached some kind of a cult status in the thrash metal scene, although theyĺve only released a few demos and broke up before a real album) or THE BANGLES. But their story is so different from the stories behind all the names Iĺve mentioned here, that it is nice to compare their story to all the others. And thatĺs my main reason to tell you a bit more about the ladies from JEZEBELLE, as they were anti-heroes in their very own way. And maybe because of that, weĺre glad to be able to give them the respect and the attention, that no one really gave them in their glory days.


Itĺs late in the eighties already, when the five ladies meet each other in London. Itĺs the place, where all the action happens. What these five ladies have in mind is to show people, that they really can play music. JEZEBELLE consists of H. Stewart on vocals, Zaz Richards on guitar, Maggot Simpson on drums, Hanna Moor on rhythm guitar and T.C. on bass. Their aim to be a good musician, encourages them to rehearse even more and soon they start playing a lot of local clubs and bars to gain popularity.

Their music is influenced by some of the early NWOBHM bands (although the NWOBHM scene had already left their glory days behind them), mixed with THE CULT (ôElectricö era), THE ALMIGHTY, ROSE TATTOO, STEPPENWOLF and other biker bands. All the ladies had gained some experience in other bands before. This resulted in a band full of skilled musicians and ready to take on the world by surprise. There is only one big disadvantage, these five ladies have and thatĺs what disturbed this band to become the successful successors to VIXEN or GIRLSCHOOL. And that is the looks of the ladies. Now I am a man, and you may think this comment is rather assaulting, but ask the opinion of the ladies themselves, and youĺll possibly get the same answer from them. They knew, that if they would have a pretty face and big tits, it would have been much easier for them to become (world) famous. But they didnĺt have these looks, and they also didnĺt have the intention to score a deal through their looks or sex appeal. Their attitude was to convince people of their musical abilities by letting their music do the talking and nothing else. A noble task, which might have worked during the grunge years, a couple of years later.

The ladies worked very hard and believed strongly in what they were doing. They had their steady daily jobs, to be able to buy good instruments and the only thing they did when they didnĺt have to work was practising. That was also the main reason, why the girls worked together so well. They all had the same attitude, and they all shared the same visions. Go to the rehearsals, working hard, playing as much as possible and trying to impress your audience by doing what youĺre good at. And doing it well.

In 1989, JEZEBELLE released a three track demo tape, the result of their first twelve minutes of very hard work. And I must admit, that it sounds absolutely great! Think about the bands, that I mentioned earlier and youĺll have the raw unpolished sound of five hard rocking ladies, who believed in what they were doing. A kick in the face, and a big Ĺfuck youĺ to commerciality and babes, who want to gain popularity by swinging with their butt. The demo contained songs like ôSatisfaction Guaranteedö, ôAinĺt No Ladiesö and ôThe Slow Oneö, the latter being the ballad as the self explaining title already suggests.

In the club scene, the band also started to make fame. They supported SLAMMER a couple of times, and some of the SLAMMER fans started following the girls around in London as well. The beginning of a small fan base, so to speak. The solid base for a good band was formed now and it was time to write new songs, shop around with their demo and playing live a lot and making sure, that the line up would stay stable. And that last part went wrong almost right away. The demo came out, when Hanna Moor was kicked out of the band almost immediately. She was the only member, whose nose went into a slightly different direction. She didnĺt really fit into this club of women, who just wanted to rock, no matter what came in their way. They were destined to rock, no matter what!! So Hanna was out, and the remaining ladies started to write more songs and went gigging in every dump, that wanted to have them on stage. Not the fancy, bigger rock clubs, but the small venues where you donĺt even want to be found dead. Playing around that much gives you a bigger chance, that someone will notice you and takes you to a higher level.

And so one day it happened, that Ricky Warwick and his band THE ALMIGHTY ran into the girls and asked them if they would support THE ALMIGHTY at The Marquee in London. They hit the stage there, which was a giant step forward, and it looks good on your c.v. as well. New songs were written, Ĺcause the time was right for a debut album. The only thing, they had to do is finding a suitable record company to release this record. The UK label Heavy Metal Records wanted to give the ladies a fair chance. In the past, this label had proven itself by bringing out some first class albums by SPLIT BEAVER, HANDSOME BEASTS and BITCHES SIN, to name but a few. Now they signed the denim and leather version of GIRLSCHOOL to their label. At the same time, they also signed ATOM SEED, by the way.

Whereas GIRLSCHOOL were actually the little sisters of MOTÍRHEAD, JEZEBELLE were more like the metal sisters of THE CULT. Just listen to the opener of their album ôBad Attitudeö, called ôAinĺt No Ladyö. Hĺs vocals do the trick, and Zazĺs guitar explosions are the cream on top of the cake. Bikers, punkers, rockers, metalheads, any musicfan could actually listen to the nine songs, that are on this powerful album. It was produced by Marino, guitar player of MARINO THE BAND, and he really did a great job here. The album sleeve contains a beautiful, full colour drawing, showing the girls in their best denim and leather outfits. The songs are solid as a rock, the album sounds great, so what else could go wrong now? Unfortunately, this great debut album with the no-nonsense mentality of the band didnĺt bring them the fame and fortune theyĺd hoped forů

Right now, it probably would have been enough. The music scene of today is not only focussed on pretty looking ladies alone, once you can play good music, the doors will go open for you. JEZEBELLE however thought that the same would happen to them. Sometimes they joked around, with the band NO SHAME as biggest example. They also knew, that one day they could be leaving England, burning their bridges, and becoming the next big stars of the L.A. scene. But little did they know, and they only worked at the local McDonalds restaurant or Pizza Hut to earn their living, instead of filling the many rock venues of L.A. Knowing this story, JEZEBELLE knew that there still was a fair chance for them to become successful, if they only would work hard enough to get there. But in 1990, the music scene in England wasnĺt too rich and very successful. And the only thing, the girls achieved with the release of ôBad Attitudeö were some reviews in local music papers and Kerrang!, plus a slot on the bill for BALAAM AND THE ANGEL, on their one-off London show. Which is not really a big reward for all the hard work, they had been doing so far. And although the story could have had an happy ending after all, with the grunge scene standing at the back door already, trying to become the next big thing. The end of the band JEZEBELLE was nearer than they thought. It could have been a marvellous experience. Four ladies, who were not the sexy ladies that you want to show to your parents, when telling them that you have found a nice girlfriend. No, they were more the kind of ladies, that could have been bricklayers, instead of rock stars being the next big hype in the rock scene of today. But this was all just wishful thinking. I think, their aim to reach that goal was much too high. The ladies formed a nice band together, but this would definitely not work in any another band. The main reason was they all had the same hopes and dreams. And that was to become successful. No matter how they looked, no matter what other people said or did. And this motivation is good, when everybody thinks the same.

At the end of 1990, it is T.C. who calls it quits, leaving the rest of JEZEBELLE behind. And as it was almost impossible to fit new members into this line up of the band, JEZEBELLE dies a silent and almost lonesome dead. What a shame for a nice bunch of Ĺfemme brutaleĺ, where you would expected a beautiful bunch of Ĺfemme fatalesĺ in a rock and roll band. None of the band members names show up in any rock and roll band line up after 1990. I think, that they work at a McDonald restaurant or the local Pizza Hut right now. And during their lunch breaks they listen to ôBad Attitudeö and think about how different their life could have been. Life can be really tough, even for hard working ladies with real musical talent and a Ĺbad attitudeĺ!!