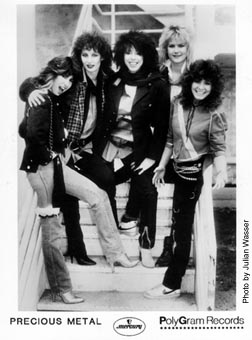 As soon as we heard, we could do an interview with former PRECIOUS METAL members Mara Fox and Leslie Knauer, we started working on a huge list of questions. Then we noticed, we'd already planned PRECIOUS METAL for our Back To The Past section of December. This would mean 'overkill' and we decided to look for a suitable construction. Best way to do this was to write a Back To The Past story in interview style. Needless to say, we also focussed on the future activities of these two former PRECIOUS METAL ladies. They'll explain everything about their solo projects and their time with PRECIOUS METAL. Finally, you can hear the truth, the whole truth and nothing but the truth about PRECIOUS METAL. Thank you Leslie and Mara for being so open to us! So fasten your seatbelts and take a ride into our time machine, which will bring you to the early days of the band, as well as the future to come. Before we start our ride, I want to introduce you to our passengers, in case you’re not familiar with the names of all the band members passing by. Leslie Knauer (lead vocals, now in KANARY), Mara Fox (guitars), Janet Robin (guitar, keyboards; now a solo artist), Alex Rylance (bass), Susette Andres (original drummer), Carol M. Control (drums) and Julia Farey (bass, she replaced Alex on the "Precious Metal" LP)